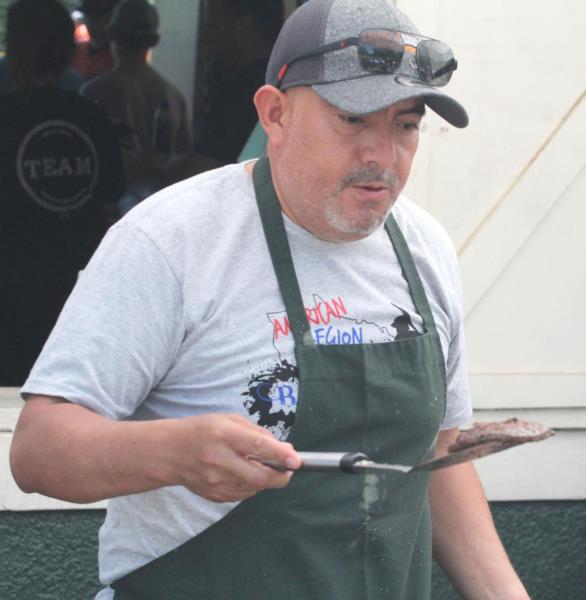 It takes a community at Athletic Park
Posted on Sep 23, 2021

J.T. Canakes grew up in Eden Prairie. He remembers playing a few times at Athletic Park in Chaska, including in the Lions All-Star Series in 2008. Now a Chaska Cubs outfielder for eight seasons, the field, the team, are home.

“I can’t imagine playing town team for anybody but Chaska,” Canakes said.

From the field to behind the scenes — Vince Meuwissen at the ticket gate, Ron Schmit and Lloyd Mellberg in the press box, volunteers such as Jerry Domeier, Bob Roepke and Joe Hoppe flipping burgers, Pam Welter and Arlene Borner’s sculpture garden, Les Dahlberg on the scorebook, John Seifert on the mower, John Rekow on social media, and Dale Welter on just about every committee — it takes a community to put on the greatest game on grass.

“I liked the atmosphere, I liked baseball,” Hoppe, a longtime Chaska Cubs board member, said. “The great part is we can all come together and give back to youth baseball, amateur ball, the city. We’re so lucky. There are people that had no idea (Athletic Park) was there. They come once and they enjoy it and then they come back again. It’s special down there.”

Meuwissen, known to many as Vinnie, after many years away living throughout the Twin Cities, returned home to Chaska in the late 90s.

Among the first players to call Athletic Park home in its opening in 1951, Meuwissen has always been drawn to the field, to the game, to the Cubs. So when asked to come down in 1999 and help out in the ticket booth, a training lesson soon became a role within the baseball community.

“Earl Schlefsky was running the ticket booth, so I started helping him. The first thing I know Earl’s gone. He quit, so I had the job. I’ve had some help over the years. I enjoy seeing the people. I hope they like seeing me in there, too,” Meuwissen said.

As ticket taker, Meuwissen is the first person the 300-plus Chaska Cubs dugout club members — or season-ticket holders — are greeted by. Meuwissen dressed often in his Cubs hat and blue Lenzen T-shirt.

Meuwissen, who turns 95 in December, began his Chaska baseball roots as a bat boy. He started playing for the Cubs in 1945. Hoping for his big break behind the plate in the 1947 season following the release of a paid outsider early in the season, second baseman Scrubby Engelhardt got the nod for the rest of the season.

Chaska won the state title that season in Mankato. Engelhardt returned to the field, while a draftee from St. Peter took over catching duties at the state tournament.

Meuwissen was part of a second Chaska team, the Royals, from 1948 to 1950. “All of the guys that couldn’t make the team here got to play,” he said. Many of those players stuck together, returning to the Cubs in 1951.

Meuwissen got his shot at catcher at the 1952 state tournament with Chaska in Austin. It was the final time the Cubs would make state until 1968.

The 2021 Waconia-Chaska-Hamburg state committee had an initial goal of 20,000 fans, which would be the first time reaching the milestone since 1960. Meuwissen was in Chaska in 1955, then playing for Anoka, when more than 24,000 spectators packed the grandstand and bleachers at Athletic Park.

The field was no more than five years old at the time. It was constructed by hand by many locals. Meuwissen said the sod for the field was harvested from outside of town.

“There was no fence over there (pointing to the third-base side of the field), so there were cars everywhere. There was no dike in the back, so it was all cars. Cars were everywhere,” said Meuwissen of the 1955 tournament, which drew 4,300 fans for the championship.

After spending much of the 2008 state tournament in the ticket booth, Meuwissen has plans to be back this tournament run, if they have him, he said.

What keeps him coming back?

“Just being here. (Dale) Welter usually brings me a burger and pop. Maybe a hot dog. That’s about all I need,” Meuwissen said.

THE VOICE OF THE CUBS

Ron and Jan Schmit moved to Chaska in 1994, just three blocks from Athletic Park. A walk down to the ball field was a regular occurrence then.

When son, Philip, became a bat boy for the team in 2009, it was an additional reason to cheer on the Cubs.

He’s been the voice of the Chaska Cubs ever since.

“Really, because I can. We all have to help out, play our part, like we can. The players out on the field, the people working on the field, running concessions, they aren’t getting paid. It’s how we keep this community that’s been built going,” Schmit said.

Schmit said it takes a team in the booth.

When Chaska’s “front-yard Santa,” Kelley Archer, who was lost to cancer in 2019, and Greg Bernard stepped away, a void was left on the microphone. Greg Erickson, the announcer of boys hockey for the Chaska Hawks, along with Kevin Holmes, have stepped up to the challenge.

And then there’s Mellberg, the “Iron Man of Athletic Park,” Schmit said. If there’s a game at the field — and sometimes Storm Red Bird Stadium in Chanhassen — Mellberg controls the scoreboard.

“(Lloyd’s) pretty quiet until he’s not. He can get pretty fired up about a few things. He is a treasure. There’s no one like him locally. We were working the high school state tournament in June and there were four games in one day, and he was there for all of them. I thought he was crazy,” Schmit said.

On the occasion that Mellberg is unavailable, Jan Schmit has been know to create the “dynamic duo” in the booth alongside her husband. She, of course, was trained on the keypad by none other than Mellberg.

Their daughter, Katie, often times worked in the ticket booth and lent a hand on busy giveaway nights like Lenzen Night.

With Athletic Park set to host the Minnesota State Amateur Baseball Tournament the next three weeks, Schmit expects fans to fall in love with the park just like he did many years ago.

“It’s fun to bring Athletic to the fore. When people come into the park, I just love that they come up and they are amazed. They are enamored with the field. We tried to go to other parks especially when Phil was playing, but none matched up to Athletic. It is just lovely. And it’s not just baseball, but the community that is present. It speaks to the character of the town,” Schmit said.

Ask longtime Chaska Cubs board member Joe Hoppe what the two best board purchases were and he’ll tell you the flat top grill and the canopy that hangs over it.

“One of the high school tournaments, Bob Roepke and I were grilling for like seven or eight straight hours. It must’ve been 90 degrees and sunny. It’s hot, and sometimes you end up with a grease burn or two, but I kind of enjoy it,” Hoppe said.

It is a job that not many volunteer for. If you’ve had a burger at Athletic Park — and 500 or so people in one day did at the recent state baseball tournament in June — you likely know the usual characters.

Hoppe and Roepke, who employs his own apron, are joined often times by Randy Maluchnik and Jerry Domeier to name a few.

“There can be a little pressure when the line is a little long, but it’s a different kind of pressure than what you face the rest of your day,” Hoppe said.

So, what makes the burgers at Athletic Park so special?

“I’d like to tell you it’s the griller. We get the burgers from Matt at Heger Dairy. Add in a bit of seasoned cast iron grill and people love the burgers. People appreciate town team baseball for a lot of things. The spirit, the camaraderie. It helps having a good meal, too,” Hoppe said.

THE MAN WITH THE PLAN

Brian Jung, public works director for the City of Chaska, is speed dial No. 1 on Welter’s cell phone. If a field improvement thought pops into Welter’s head, Jung is his first call.

“I usually cringe a little,” said Jung about Welter’s name popping up on his caller ID. “But honestly, we have a great working relationship. That goes for the whole group. They are very passionate. It’s not just the game, it’s about the field, too. They take a lot of pride like we do at the city. To have a facility like Athletic, it takes commitment from the city, the community, and commitment from the actual users. Dale has passed on the right way of doing things after games, after practice, with the high school team, other users. It can go away very quickly. And it takes a long time to put it back to together.”

Jung, who has worked for the City of Chaska since 1984, is the driving force behind the modern-day Athletic Park. Teams won’t find a smoother playing surface. Jung credits location. “It’s the perfect place for a baseball field,” he said.

Many years, though, the banks of the Minnesota River have spilled into Athletic Park. Jung and crew have brought the field back to all of its glory every time.

Athletic Park will look a bit different for opening night Aug. 20. Multiple city departments have dedicated time over the last two weeks to prepare the field, which has included mound and batter’s box redoes, and what surrounds the field.

Jung said the press box was painted, all hard surfaces were blacktopped, fencing was pushed out behind the first-base dugout and behind the grandstand to accommodate a larger concessions area. New electrical wiring was added in the press box as well.

Jung employed the city’s engineer staff to configure the parking area for the most spots possible.

Asked how many crew members were active in preparations. “Most of them. It’s an enormous project. But one we are very happy to have the ability to be a part of,” Jung said.

This will be Jung’s fourth state amateur baseball tournament; his first in 1988.

“There wasn’t irrigation down at the park so we would pump water out of the old crick. Every morning we’d fuel up the pump and use a flood type irrigation method. We’d go back at noon and do it again. We did that for three weeks leading up to the event,” Jung said.

The state tournament is a time to showcase Athletic Park to the entire state of Minnesota.