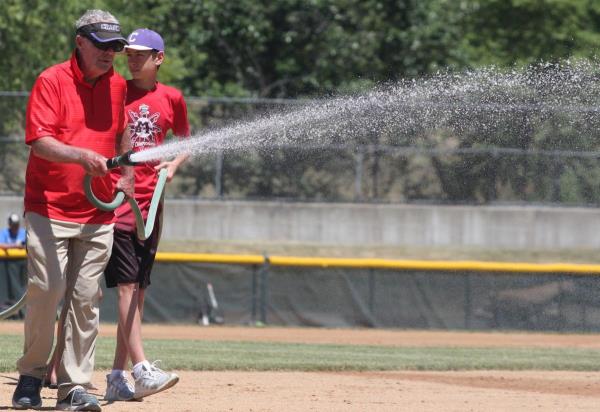 Walk the halls beneath the Athletic Park grandstand and you will see boards full of baseball memories — great teams and players, tournaments past, history remembered.

Despite repeated thoughts of the boards finding a dumpster, Dale Welter's display remains, and always grabs the attention of fans entering the park or visiting behind the first-base dugout.

If it happened at Athletic Park, or in the state of Minnesota, baseball-wise, Welter has a display to honor it.

"I saw it at a tennis tournament probably 30-40 years ago in Edina. They had these outside displays. I just thought they were so neat. So I started with the all-star series rosters and it kept growing, and growing, and it is what it is now. I always kid about the display committee, and the committee keeps getting grumpier and grumpier each year, but that display committee needs just one compliment to keep it going," Welter said.

The man who put Chaska's ballpark on the map, according to WCCO's Mike Max, has poured more than 60 years of blood, sweat and tears into Athletic Park. He is Mr. Baseball in Chaska.

Welter played with the Cubs from 1960 to 1982. It wasn't until his junior year, playing Legion baseball for Bob Tadsen, that he was part of a high school age team. His school, Guardian Angels, began a program his senior year.

After coaching baseball for three years at Eden Prairie High School, he got his dream job, leading the Chaska High School baseball team from 1981 to 2008.

"I never thought it would happen, but it did. It really sunk in. I was the high school coach, and I needed to do whatever it took to make our field a great place to play," Welter said.

Ever since, his role at the park has never diminished.

Whether it's pulling weeds, teaching the proper way to rake the infield, entertaining the umpires, or manning the Ted Nikolai tent down the right-field line, Welter is involved in every aspect.

And along the way he's learned it's not just about the players, it's about the fan experience, too.

"Over the years, if you look at the pictures, we've tried to do different things. Tried to make the park the best in the state. I remember years ago we had this big discussion about fencing down first- and third-base lines. I was adamant about three-foot fences. This way a fan can sit in a chair and still see the game," Welter said.

As the 98th annual Minnesota State Amateur Baseball Tournament begins Friday, Aug. 20, you can expect to see and hear Welter at the ball park.

"The field, where it's located, it has this small-town feel. You'll see parks in the middle of town, but this one, it's kind of hidden. And it will always be that way. It's just a great site. There isn't a bad seat in the place," Welter said.

Read more about what makes Chaska's Athletic Park a community, on pages 9-12.