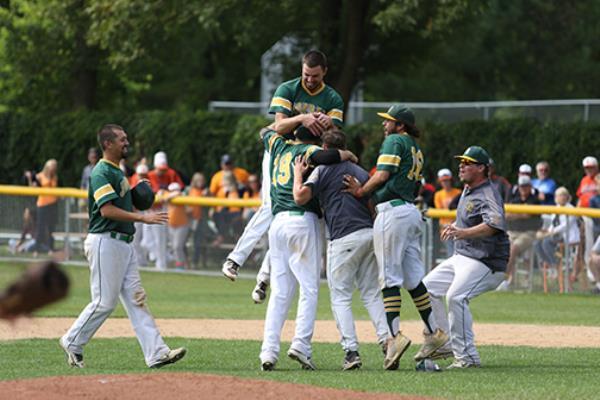 After being robbed of what looked like the game-winner, the Jordan Brewers made sure there was no doubt about the next hit when winning the game in the bottom of the 12th.

With Adam Kalal on second base after a single and a player hit by a pitch, Joe Lucas sent a deep shot to the outfield that had the promise of driving in the first run of the game. Fergus Falls right fielder Jack Heideman had other ideas and tracked down the ball near the wall to send Kalal sprinting back to second. Not wanting to squander what was one of few scoring opportunities, Scott Hollingsworth belted the ball to left field to score the only run of the game in the bottom of the 12th.

Joe Lucas earned the win in 2/3 off an inning with a pair of strikeouts, pitching in relief after Nate Beckman scattered six hits across 11 1/3 innings with six strikeouts. Peter Gaustad went 10 innings for the Hurricanes with eight hits allowed for Fergus Falls.

With both pitchers bringing their best stuff, there were few chances to score, as evident by the 1-0 12 inning result.

Midway through the game, the two sides exchanged scoring opportunities. Jordan loaded the bases in the bottom of the fourth with only one out, following a Nate Beckman single, an error and a walk to Devyn Ulibarri. Fergus Falls pitcher Jonathan Draheim struck out the next batter and forced an easy pop fly to end the inning to keep the game scoreless. Then in the top of the fifth, Jack Heideman singled before an error and a fielder's choice put runners on the corners. Once again the defense won out and the two sides remained deadlocked at 0-0.

Kalal led the Brewers with three hits and scored the winning run. Jake Anderson and Jack Heideman each had two hits for the Hurricanes.