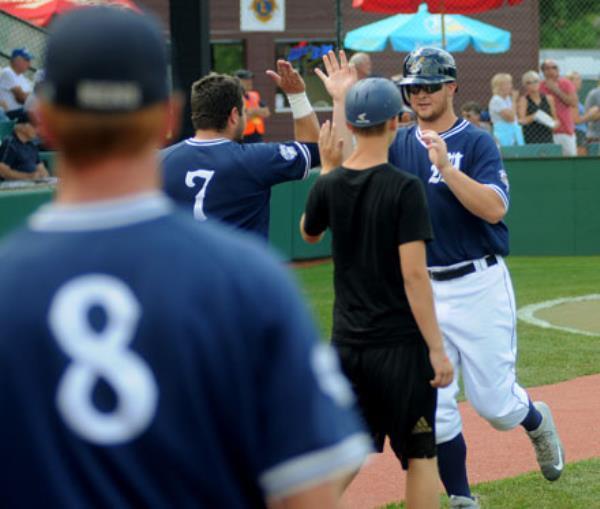 Class B roundup at Dassel: Miesville moves on after 13-inning game against Chaska
Posted on Aug 26, 2019

It took 13 innings but Miesville finally got a hit with two outs to defeat Chaska 2-1 Saturday in Dassel.

It was a marathon that left the Mudhens catching their collective breath after Deryk Marks singled through the left side of the infield with two strikes to score Austin LaDoux from second base.

Miesville had stranded 15 men up until that point, which included leaving the bases loaded in the ninth, 10th and 12th innings but all that’s moot now that the Mudhens are moving on to the semifinals to face Dundas next Friday at 5 p.m. in Dassel.

Jacob Dickmeyer got hit by a pitch to start the bottom of the 13th and LaDoux came on to run for him. A sacrifice bunt moved him to second base and leadoff hitter Matt VanDerBosch also got hit by a pitch. After a fly ball to center field, Marks fell behind 0-2 and fouled off a pitch before hitting the game-winning single.

For the first nine innings Cubs starter Drake Kilber dueled with Dickmeyer. Kilber threw nine-plus innings and allowed one run on nine hits. He struck out eight and walked three. Dickmeyer kept pitching and finally exited after the 11th inning having allowed just three hits and one unearned run back in the sixth inning. He walked two and struck out 11 in a dominating performance.

Dickmeyer gave way to Chris Olean and Chaska had it first real threat of the game as it loaded the bases with two outs in the 13th inning after Dylan Peterson singled along with Justin Johnson and Jon Leighton. But Olean got Tyler Polster to ground out to shortstop to end the inning.

Miesville grabbed a 1-0 lead in the fourth inning when second baseman Brian Sprout got a base hit to left field to score first baseman Ronnie Sweeney, who reached on a one-out walk and moved to second on a single from catcher Nate Hammes.

Chaska came back in the sixth inning to tie it 1-1 after Dylan Peterson doubled with one out. It was the Cubs’ first hit of the game. He later scored on an error at second base.

The Mudhens had a threat in the bottom of the sixth inning after Sweeney reached on an infield single and Hammes walked but a double play ended thoughts of a bigger inning.

In the ninth Miesville loaded the bases with nobody out but Pete Ohnsorg, who came on for Kilber got a pair of strikeouts and a groundball to get out of the inning.

Ohnsorg and Cubs continued to dance out of trouble in the 10th when the Mudhens loaded the bases again. Werner doubled to start the 10th and an intentional walk put Marks on first before Sweeney hit into a double play and Ohnsorg struck out Dylan Blake to end the inning.

Ohnsorg got out of the 12th after Miesville loaded the bases by getting a force out at home and struck out Blake again.

Chaska will face Victoria Sunday at 7 p.m. in Delano.